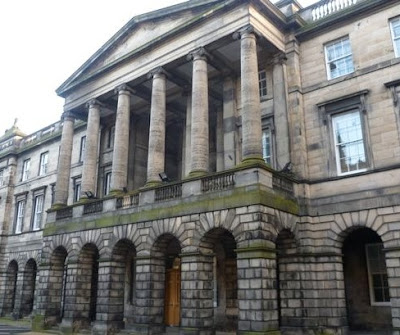 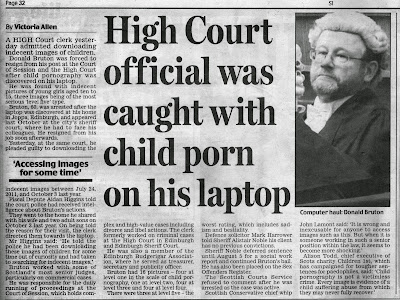 Donald Bruton was forced to resign from his post at the Court of Session and the High Court after child pornography was discovered on his laptop.

He was found with indecent pictures of young girls aged ten to 15, three images being of the most serious 'level five' type.

Bruton, 60, was arrested after the laptop was discovered at his home in Joppa, Edinburgh, and appeared last October at the city's sheriff court, where he had to face his colleagues. He resigned from his job soon afterwards.

Yesterday, at the same court, he pleaded guilty to downloading the indecent images between July 24, 2011, and October 3 last year.

They went to the home he shared with his wife and two adult sons on October 3 last year. On being told the reason for their visit, the clerk directed them towards the laptop.

Mr Higgins said: 'He told the police he had been downloading these images of children for some time out of curiosity and had taken to searching for indecent images.'

Bruton worked with some of Scotland's most senior judges, particularly on commercial cases.

He was responsible for the daily running of proceedings at the Court of Session, which holds complex and high-value cases including divorce and libel actions.

The clerk formerly worked on criminal cases at the High Court in Edinburgh and Edinburgh Sheriff Court. He was also a member of the Edinburgh Budgerigar Association, where he served as treasurer, secretary and publicity officer.

Sheriff Noble deferred sentence until August 5 for a social work report and continued Bruton's bail. He has also been placed on the Sex Offenders Register.

The Scottish Courts Service refused to comment after he was arrested as the case was active.

Scottish Conservative chief whip John Lamont said: 'It is wrong and inexcusable for anyone to access images such as this. But when it is someone working in such a senior position within the law, it seems to become more shocking.'

Alison Todd, chief executive of Scots charity Children 1st, which has campaigned for tougher sentences for paedophiles, said: 'Child pornography is not a victimless crime. Every image is evidence of achild suffering abuse from which they may never fully recover.'

Posted by Anonymous at 1:30 pm