Scotland in Crisis under Tory Union : Conditions so bad, Citizens Advice publish Survival Guide for Scots with no money & no food 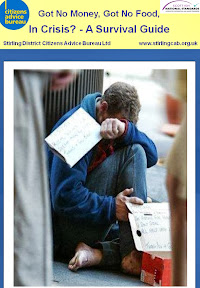 Scotland ‘heading for Somalia conditions under David Cameron’ WELFARE & PUBLIC SERVICE CUTS forced on Scots by the London based Conservative Coalition Government of David Cameron are causing such hardship there are now tens of thousands of ordinary Scots who have no money, no food, no access to living space and little chance of help to overcome their circumstances.

The crisis in Scots personal living conditions has now become so bad that Citizens Advice Scotland along with the Citizens Advice Bureau in Stirling  have published a Survival Guide for Scots who have no money to buy food. Stirling CAB, a charity with volunteer workers, said it was forced to issue the document after being swamped by pleas for help from people left destitute and with no access to money or benefits after being hounded by DWP, ATOS and other Westminster based UK Government agencies.

The stark document is a response to growing numbers of people who are coming to the bureau in extreme poverty as a result of the ongoing recession and the UK government's welfare reforms. It gives clear advice on the number of foodbanks and other emergency services available in the area. Stirling CAB is the first in Scotland to launch such a guide, but Citizens Advice Scotland say that others may follow, as the same problems exist in all parts of the country.

Speaking at the event, Craig Anderson, Manager of Stirling District CAB said: “The increase in the number of people coming to CAB with emergency situations - no money, no food, no power has become a major problem in recent times and is rising sharply. It is indicative of a range of circumstances linked to the economic downturn and the reshaping of the Welfare system. The purpose of the research is to drill down into the root causes of the increase, explore user’s perspectives on the emergency situation and to provide a practical and useful response to help those in need.

"We are working here with a number of local agencies and charities to bring together all the emergency help that is available to people, and maximise the assistance we can give them."

Launching the ‘Survival Guide’, Margaret Burgess MSP, Minister for Housing and Welfare said: “I commend the excellent work of front line advice and support organisations, such as Citizens Advice Bureaux, in helping individuals and families in Scotland who are suffering the consequences of the UK Government’s cuts and changes to the welfare system.

“The rising number of people in crisis because of these reforms is utterly deplorable. That is why I am pleased to take part in the launch of Stirling CAB's Survival Guide for people who are in extreme poverty.

“The Scottish Government is doing all it can within our existing limited powers and resources - to mitigate the worst impacts, including providing an additional £7.9 million for advice and support organisations to help them cope with the increase in demand for their services as a direct result of these reforms.

“However, we can only do so much. Only with independence can we ensure that Scotland has a welfare system which reflects our values and beliefs and ensures fair and decent support for all.” 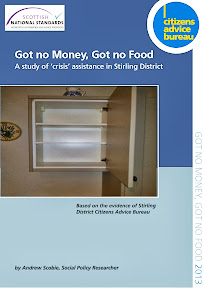 Stirling CAB’s Research Report reflects savage crisis across Scotland. CAS CEO, Margaret Lynch added: "Stirling is at the heart of Scotland, and the CAB service is at the heart of this community. The cases seen by Stirling CAB are typical of those seen by the CAB service across Scotland as a whole. Their work in putting together this guide is an example of the excellent service they provide - even if the fact it is necessary is a disgrace.

"Here in Stirling, as across Scotland, families are being pushed into poverty by the double whammy of the recession and the benefit cuts. The CAB sees people every day who haven't eaten, can't afford to feed or heat themselves, and are at risk of homelessness. In the past, the benefits system was a safety net for such people, to help them through those problems and make sure they didn't fall into total crisis. With the UK government's welfare reforms, that safety net is no longer there. That’s why this Survival Guide is necessary. It shows how the CAB is a vital service to this community, and quite literally a lifeline to those in need.”

"Sadly, I can report that other CAB offices across Scotland are reporting similar trends, and we expect that many of them will be publishing similar documents for their communities before too long."

Posted by Anonymous at 1:53 pm

David Cameron and his party all just back from there luxury holidays should be ashamed of themselves. How they sleep at night we don't know. One thing for sure is a lot of people we speak with including our family and friends think they will go down as the worse party in history. No Compassion what so ever for the sick/disabled/poor the only people they seem to care about are themselves and the Rich.

This is the SNP & the Law Society of Scotland's vision for the average Scot.

Remember, the Law Society of Scotland now have control of the CAB under their remit now?