Police Scotland asked to investigate corruption at HBoS. POLICE SCOLTAND have been asked to investigate Halifax Bank of Scotland (HBOS) now known as Lloyds Banking group, after complaints were lodged with the force by former HBoS shareholder & transparency campaigner, Mr Thomas Minogue. Dunfermline based Mr Minogue, who met officers from Police Scotland recently, is demanding an investigation into any fraud & corruption at the bank in the events preceding the financial crisis.

While there have been little inquiries into corruption at HBOS in Scotland prior to yesterday’s developments, the collapsed bank HBoS has been under investigation by Thames Valley Police as part of “Operation Hornet” which has recently seen eight people charged with criminal offences ranging from money laundering to fraudulent trading and conspiracy to corrupt, following a large-scale investigation into Corruption and other offences originating from the Halifax Bank of Scotland branch in Reading, Berkshire.

The charges in England, reported by Thames Valley Police HERE follow an investigation carried out by the Force’s Economic Crime Unit (ECU), after the case was referred to Thames Valley Police by the Financial Services Authority (FSA) because the alleged offences originated from HBOS’s Impaired Assets team based at Reading.

However, no equivalent investigation has been undertaken by Police in Scotland, prompting concerns Scottish prosecutors at the Crown Office are trying to avoid any major investigation into a well known culture of corruption in Scotland’s banking & financial sector.

Scotland’s Sunday Post newspaper reports further on the developments in an article reprinted below : 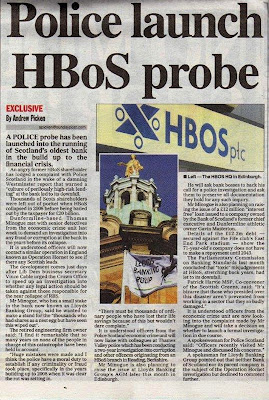 A POLICE probe has been launched into the running of Scotland's oldest bank in the build up to the financial crisis.

An angry former HBoS shareholder has lodged a complaint with Police Scotland in the wake of a damning Westminster report that warned a "culture of perilously high-risk lend­ing" at the bank led to its downfall.

Thousands of Scots shareholders were left out of pocket when HBoS collapsed in 2008 before being bailed out by the taxpayer for £20 billion.

Dunfermline-based Thomas Minogue met with senior detectives from the economic crime unit last week to demand an investigation into any fraud or corruption at the bank in the years before its collapse.

It is understood officers will now contact a similar operation in England known as Operation Hornet to see if there any Scottish leads.

The development comes just days after Lib Dem business secretary Vince Cable urged the Crown Office to speed up an investigation into whether any legal action should be taken against those responsible for the near collapse of RBS.

Mr Minogue, who has a small stake in the bank now known as Lloyds Banking Group, said he wanted to make a stand for the "thousands who had shares as a nest egg but have seen this wiped out".

The retired engineering firm owner said: "I find it remarkable that so many years on none of the people in charge of this catastrophe have been held to account.

"Huge mistakes were made and I think the police have a moral duty to establish if any criminality or fraud took place, specifically in the years building up to 2008 when it was clear the rot was setting in.

"There must be thousands of ordi­nary people who have lost their life savings because of this but wouldn't dare complain."

It is understood officers from the Police Scotland economic crime unit will now liaise with colleagues at Thames Valley police which has been conducting a two-year investigation into corruption and other offences originating from an HBoS branch in Reading, Berkshire.

Mr Minogue is also planning to raise the issue at Lloyds Banking Group's AGM later this month in Edinburgh.

He will ask bank bosses to back his call for a police investigation and ask them to preserve all documentation they hold for any such inquiry.

Mr Minogue is also planning on rais­ing the issue of a £12 million "interest free" loan issued to a company owned by the Bank of Scotland's former chief executive and Dunfermline athletic owner Gavin Masterton.

Details of the £12.2m debt — secured against the Fife club's East End Park stadium — show the 71-year-old's company does not have to make a repayment until 2043.

The Parliamentary Commission on Banking Standards last month concluded that "toxic" misjudgements at HBoS, stretching back years, had let to its downfall.

Patrick Harvie MSP, Co-convener of the Scottish Greens, said: "It's bizarre that those who presided over this disaster aren't prevented from working in a sector that they so badly damaged."

It is understood officers from the economic crime unit are now look­ing into the complaint made by Mr Minogue and will take a decision on whether to launch a formal investiga­tion in due course.

A spokesman for Lloyds Banking Group pointed out that neither Bank of Scotland nor its parent company is the subject of the Operation Hornet investigation but declined to comment further.

Posted by Anonymous at 3:44 pm

Seems as if once again the Crown Office has been caught sitting on its hands.....for several years!

The police in scotland usually love a PR opportunity to show they are fighting crime but when it comes to anything relating to newspapers, the banks and government and council officials, they are very quiet. I wonder why!

SCOTLAND - Probably the most corrupt small country in the World?

And yet again Frank Mulholland at the Crown Office is to be found sitting on his hands.......thereby protecting corrupt Scottish banks - RBS and HSBC to name but two - based in Edinburgh.