Something to hide about the honour, Mr First Minister ? INFORMATION likely to implicate Scottish Ministers & other figures in the Scottish Government involved in the awarding of ‘Dame’, the female equivalent of a “knighthood” to the Scotland’s former Lord Advocate Dame Elish Angiolini DBE QC (nee McPhilomy), has been angrily withheld from Freedom of Information requests by Scottish Government Civil Servants, after leaks to the media suggested Scottish Ministers were involved “via the backdoor” in ensuring recommendations were made to London that the controversial former Lord Advocate received a knighthood for ‘her services’ to Scots law. Almost instantaneously after receiving the honour Dame Elish Angiolini was swiftly taken on by the First Minister Alex Salmond as his Ministerial Complaints Adviser in a role seen by most as little more than an exercise to ensure Scottish Ministers are not found guilty of misconduct while in office.

Several leading figures in Scotland’s legal establishment questioned the decision to give the controversial, former Lord Advocate a knighthood while other senior legal figures connected to the Lockerbie case have condemned Dame Angiolini’s tenure as Lord Advocate as "a disastrous experiment” a period which saw some high profile disasters for Scotland’s Crown Office including the collapse of the World's End murder prosecution where the Chief Prosecutor for the Lord Advocate ran away from the court, and judges criticised the handling of the prosecution, a scandal ranking high among other notable case losses, injustice & controversies including huge bonus payments made to Crown Office officials under Angiolini’s tenure as Lord Advocate. 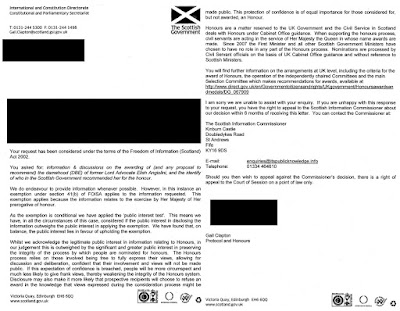 Whilst we acknowledge the legitimate public interest in information relating to Honours, in our judgement this is outweighed by the significant and greater public interest in preserving the integrity of the process by which people are nominated for honours. The Honours process relies on those involved being free to fully express their views, allowing for discussion and deliberation, confident that their involvement and views will not be made public. If this expectation of confidence is breached, people will be more circumspect and much less likely to give frank views, thereby weakening the integrity of the Honours system.

Disclosure may also make it more likely that prospective recipients will choose to refuse an award in the knowledge that views expressed during the consideration process might be made public. This protection of confidence is of equal importance for those considered for, but not awarded, an Honour.

Honours are a matter reserved to the UK Government and the Civil Service in Scotland deals with Honours under Cabinet Office guidance. When supporting the honours process, civil servants are acting in the service of Her Majesty the Queen in whose name awards are made. Since 2007 the First Minister and all other Scottish Government Ministers have chosen to have no role in any part of the Honours process. Nominations are processed by Civil Servant officials on the basis of UK Cabinet Office guidance and without reference to Scottish Ministers.”

During the time of Elish Angiolini’s tenure as Lord Advocate, she employed a private law firm based in Glasgow LEVY MCRAE, which operates for clients in the notorious tax avoidance haven of the Cayman Islands and who also represented shamed former Glasgow City Council Boss & Cocaine addict Steven Purcell to “go after” an anti abuse campaigner named Robert Green. The law firm employed by Angiolini threatened several media outlets with legal action over reporting of the Hollie Greig case and Green’s campaign to out the alleged abusers, while Scottish Ministers further covered up, refusing to disclose who funded the work carried out by law firms on Angiolini’s behalf and that of others linked to accusations in the case.

After further investigations into the prosecution of Robert Green, ordered by the Crown Office under Angiolini’s tenure as Lord Advocate, it later transpired the Crown Office, Police & other public bodies have spent at least £1/2 MILLION of taxpayers money going after the anti abuse campaigner, who was recently found guilty of committing a breach of the peace just because he was ‘handing out leaflets’ asking for an investigation into claims a downs syndrome girl had been abused in Aberdeen.

Curiously, while the Scottish Government adamantly refused to release any information on the controversial recommendation for the former Lord Advocate’s knighthood, hiding behind UK Cabinet Guidance & also using the grounds secrecy was of the utmost importance, a different stance was adopted on another honours issue after accusations were raised of involvement by the First Minister in recommending SNP Party donor Brian Souter for a knighthood.

In the Souter honour case, Dame Angiolini’s Ministerial Complaints Adviser colleague, another former Lord Advocate, Lord Fraser of Carmyllie was brought in to author a report which swiftly exonerated the First Minister and led to lengthy Press Releases from the Scottish Government denying any involvement on Scottish Minister’s part (which no one really believed – Ed)

Lord Fraser of Carmylie is of course widely known for being arrested on an aircraft after an alleged “air rage” incident, reported by SLR HERE

Sources have told Scottish Law Reporter today that the Scottish Information Commissioner, Kevin Dunion has been asked to look into the Scottish Government's refusal to release the information on the honour for the former Lord Advocate.

Posted by Anonymous at 1:08 pm

How ironic the man who wants independence so he/his party can rule forever hides behind the coat tails of Westminster excuses when asked to disclose why his own "Scottish Government" put up a Cabinet Minister for a knighthood from a country he wants to be independent from.

Mr Salmond makes no sense neither does his snp.

Couldn't have said it better myself

They made the same excuse when they gave Frank Walker an an OBE, Frank Walker was the Jersey senator who persecuted Stuart Syvret and got Haut de la Garenne child abuse investigation discredited

Robert green will never be able to get the scottish goverment to admit fault in the cover up of hollie greigs child abuse claims unless the people of scotland protest or not voting for the party and grampian police need to show us all they are not corrupt and order a independent enquiry in to hollies scandal and the murder cover up.

9am edinburgh holyrood scottish parliament buildings 9am supported by a msp and the main stream media hopefully.


We wish and will pray for robert to get a non custodial sentence but if he does edinburgh march 6th is a platform we have permission to hold a peaceful protest the police has been informed media attention will spotlight the outcome of robert greens sentence we need the people of scotland they are your children do something and save them from child abusers.

we wish you all well if you cant attend link to all these sites blog our event online and to any uk media outlet.

TAKE THE DAY OFF ON THE 6th OF MARCH 2012
We need you to Blog,Facebook,Twitter,Write to your news papers,tv,radioshow,Mp,Msp,president,More importantly go to your council building your goverment office your town centre and stop child abuse to do nothing is agreeing with the abusers.
One Voice For The Kids and in association with the Against child Abuse Network, alongside many other global organisations who are against child abuse, are set to create the world's largest Against Child Abuse Protest of its kind ever seen. Let me share a dream with you...does working in splendid isolation work for you and your organisation? Just stop and think for a moment. If you and your organisation works alone, in our experience, if you do what you have always done, you will get what you have always got. We are encouraging like minded organisations to join the Against Child Abuse Network as a point of contact between respective groups. To learn more about the network, click on the link or copy and paste the link below. Our vision is simple. Imagine a protest so large in numbers, all protesting on the same day around the world at as many of the world's Government Offices as possible.
Worldwide Lawful Rebellion.
Who is up for it?
It is time the world took a stand against these people in power. So, we are calling out to all like minded orgainsatios who are against child abuse, to join us and help in the planning of the worlds largest protest in history. It has never been done before. This is to take place on the same day. Although the idea of the "New Dawn " has already been done, we can call it the "New Day". We are looking for as many of the world's organisations who are against child abuse to get behind this as we can.

We can expect a great deal more of these incestuous self serving cover ups if the zenophibic SNP get anywhere near self rule.

Alex Salmond,come you have to do something about this,if you dont it could harm you and Scotlands aim for independence.im all for independence,but im not sure if i want you to take me there if i cant trust you to deal with an important situation like this. you have to do something to mend this,keep that woman Elish Angiolini out of Scottish affairs and government positions. its going to come and blow up in your face.and while you are at it,step in for Robert green,we all know whats been going on,stop treating us like fools and idiots.