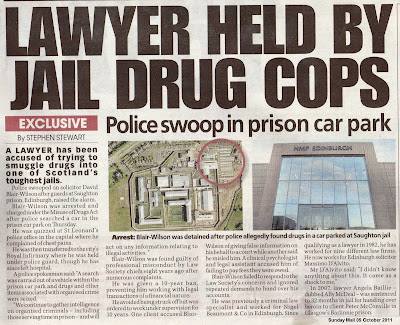 A repeat of the 1990’s FETTESGATE MAGIC CIRCLE boys-for-sex-with-judges scandal is on the cards, according to Scots legal insiders after it became known senior members of Scotland’s legal establishment including some of the country’s most senior judges, Police, prosecutors and Holryood politicians have been shaken by the arrest of crooked lawyer David Blair Wilson for the attempted smuggling of drugs into Saughton Prison in Edinburgh. Judges and their colleagues in the legal world are rumoured to be worried that enquiries into the life of the lawyer who once claimed to have compromising pictures of top law officers & prosecutors from the Crown Office caught up in gay sex orgies with young men & juveniles may reveal the Magic Circle of boy swapping Scots justice figures has existed all along, despite a report in the 1990s by the then WA Nimmo Smith QC & JD Friel, Procurator Fiscal for North Strathclyde which attempted to put a lid on the dealings of judges whose decisions were rumoured to be influenced by blackmail using compromising information & pictures relating to rent-boys.

A legal insider speaking to Scottish Law Reporter has claimed there are moves to persuade Blair Wilson to take a guilty plea rather than allow him to plead not guilty because many senior figures in the legal community fear press enquiries into what Blair Wilson has been up to and who he was allegedly supplying drugs to, may lead to a 2011 version of the Magic Circle justice scandal landing on the front pages.

The Report on an Inquiry into an Allegation of a Conspiracy to Pervert the Course of Justice in Scotland which can be viewed online here : REPORT ON MAGIC CIRCLE GAY JUSTICE SCANDAL (pdf) was widely rubbished as little more than an attempt to cover up well known habits of certain judges & prosecutors in Scotland who sought & gained sexual contact with males under the ages of 18 and less than 16. With the arrest of Blair Wilson, the judiciary & Crown Office staff who appear to have continued the habits of the Magic Circle are now worried for their own positions.

Blair Wilson is mentioned in the following paragraphs of the report : “At the initial meeting with the reporting officer Crawford was asked to elaborate on the matter concerning Mr Douglas Allan and confirmed that he had informed DC Few that these photographs existed. He claimed that during the summer of 1988 he had been in the "Laughing Duck" public house 24 Howe Street, Edinburgh, along with Conroy and another male homosexual associate of Conroys, David Blair Wilson, then of Wilson Terris & Co., 22 Hill Street, Edinburgh, when he noticed another male customer continually looking at Conroy and smiling to him. As he was having a relationship with Conroy he asked who the apparent admirer was and was informed by Conroy in the hearing of David Blair Wilson that it was "Douglas Allan" the Procurator Fiscal, the "Top Law man in Edinburgh".

Conroy and Wilson informed Crawford that David Blair Wilson had compromising photographs of Douglas Allan along with a "young guy", Crawfords understanding was that although Conroy was present he was not the young man involved in the photo session."

Although the meeting on 3January 1991 was between Souter and Crawford alone, thereafter the investigation was carried out by Souter and Detective Sergeant Peter Brown together. There was a further meeting between them and Crawford on 14 January 1991, when Crawford repeated much of what he had said on 3 January. On 25 January 1991 Souter and Brown met Conroy in Parsons Green Terrace, Edinburgh.

According to the memorandum he "agreed to speak off the record regarding his involvement as a juvenile with homosexuals in the legal profession and although he denied that he had personally had sexual relationships with anyone he claimed that he was aware of the homosexuality of" a number of persons whom he named, one of whom was Douglas Allan.

The memorandum proceeds: "He claimed that his only knowledge of these men was hearsay but that Douglas Allan is a friend as is his own solicitor David Blair Wilson. He claimed that these people had all at some time attended parties ... in Palmerston Place, Edinburgh, at which young men attended and where alleged sexual activities occurred." He agreed to provide a written account of these matters, but in the event he did not do so.

A BOY IN THE BOOT : In one rumour circulating the Scots legal world relating to one of the most prominent figures in Scotland’s legal establishment who regularly appears in newspaper articles promoting the interests of the profession and has even appeared in front of msps at the Scottish Parliament, it is claimed that after playing a round of golf with colleagues, the ‘senior legal figure’ opened the boot of his car to show off a young boy under the age of sixteen who was hiding under a cover which he was transporting to his “country home” for sexual purposes. (Sorry, need some air after reading this one – Ed)

POPPERS : A source has also claimed an individual from the gay scene in Edinburgh has allegedly come forward, volunteering information he has directly supplied senior legal figures with illegal drugs and also “poppers”, a kind of narcotic stimulant used in gay sex.

There is little doubt in the Scottish legal community that several judges, prosecutors & senior lawyers “have the potential to be implicated in a new gay justice scandal due to their sexual preferences for young men and other habits” and it has been confirmed to journalists already looking into the affair there is significant anger from legal circles directed at Lothian & Borders Police for making the arrest in the first place. However Police source say they are determined to act against any criminals (Oh really ? Another break in of Fettes on the cards is it ? – Ed)

The Sunday Mail newspaper reported on the Blair Wilson arrest :

A LAWYER has been accused of trying to smuggle cannabis into one of Scotland's toughest jails. Police swooped on solicitor David Blair-Wilson after guards at Saughton prison, Edinburgh, raised the alarm.

Blair-Wilson was arrested and charged under the Misuse of Drugs Act after police searched a car in the prison car park on Thursday. He was quizzed at St Leonard's police office in the capital where he complained of chest pains. He was then transferred to the city's Royal Infirmary where he was held under police guard, though he has since left hospital.

A police spokesman said: "A search was carried out of a vehicle within the prison car park and drugs and other items associated with organised crime were seized."We continue to gather intelligence on organised criminals - including those serving time in prison - and will act on any information relating to illegal activities."

Blair-Wilson was found guilty of professional misconduct by Law Society chiefs eight years ago after numerous complaints. He was given a 10-year ban, preventing him working with legal transactions of a financial nature.

He avoided being struck off but was ordered to work under supervision for 10 years. One client accused Blair-Wilson of giving false information on his behalf to a court while another said he misled him. A clinical psychologist and legal assistant accused him of failing to pay fees they were owed. Blair-Wilson failed to respond to the Law Society's concerns and ignored repeated demands to hand over his accounts.

He was previously a criminal law specialist and worked for Nigel Beaumont & Co in Edinburgh. Since qualifying as a lawyer in 1982, he has worked for nine different law firms. He now works for Edinburgh solicitor Massimo D'Alvito. Mr D'Alvito said: "I didn't know anything about this. It came as a shock to me."

In 2007, lawyer Angela Baillie - dubbed Ally McDeal - was sentenced to 32 months in jail for handing over heroin to client Peter McConville in Glasgow's Barlinnie prison.

Posted by Anonymous at 2:50 pm

A company that provided security at T in the Park and other music festivals was being used as a front for tax fraud, a court has heard.

David Stewardson, from Mayfield in Midlothian, admitted defrauding the government out of more than £1m while running Westcoast Group Security.

The 55-year-old also pled guilty to illegally claiming benefits of £14,000 over four and a half years.

Sentence was deferred until next month for background reports.

Edinburgh Sheriff Court heard that Stewardson did not pay any VAT or income tax between 23 December 2004 and 6 July 2009, when more than £3m went through a bank account solely operated by him.

The security company - which also provided security at Glastonbury - had a turnover sometimes in excess of £1m a year, the court was told.

Fiscal depute Isabel Clark said: "The accused at this time was also claiming benefits and he failed to declare to the DWP [Department of Work and Pensions] that he was running a business."
'No assets'

She told the court that all the money had gone through Stewardson's personal account. The bank became concerned because of the high amounts being put through and because the money was always withdrawn in cash.

The matter came to light when Stewardson was unable to provide documentation to the authorities about National Insurance and VAT payments.

Mrs Clark said: "At no time did he declare he was employed or operating the business and earning a turnover of £3m. The accused does not have any assets that have been found."

She added that the Crown would move to forfeit assets if any could be found.

Stewardson's lawyer David Blair-Wilson said his client was provided with £150 a week to run the company and lived a simple life in a council house.

He said: "He is not a criminal mastermind. He lives in a council house, has never been on an abroad holiday and has a motability car."

The court heard that the first offender suffered from diabetes, was disabled and was in constant pain.

He told the court that Westcoast Group had been owned previously on two occasions by persons "known to the courts".

The lawyer added that there had been prosecutions and shootings in Glasgow about it and that Stewardson was told he would come to a similar fate if he did not comply.

Stewardson was released on bail, pending his sentence.