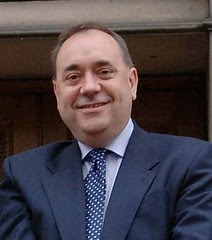 First Minister Alex Salmond will need a judge without a dodgy background to chair his media ethics effort. ON THE DAY Lord Leveson’s Inquiry into the Culture, Practices and Ethics of the Press was published, absurdly accusing the UK media of creating havoc with the public interest, Scotland’s First Minister Alex Salmond has outlined his plans for meddling with free speech in the media & published criticism north of the border, with the announcement he is looking for a Court of Session judge to lead a five ‘non-politician’ implementation group who will ‘take forward’ the issue of press ethics in Scotland.

It has been rumoured this evening Mr Salmond’s advisers have drawn up a short list of currently serving and retired judges, a list which include the names of Lord Nimmo Smith (who recently chaired the ‘inquiry’ into problems at Rangers Football Club) and also none other than recently retired Lord President, Lord Hamilton.

Stocking fillers for the five ‘non-politician' roles are rumoured to include several controversial figures and former law officers already given positions by Mr Salmond (A former Lord Advocate, perhaps ? – Ed)

First Minister Alex Salmond has outlined plans for an independent group to take forward the issue of press ethics in Scotland.

But Labour, the Conservatives and Liberal Democrats said Mr Salmond was not fit to lead such reforms.

They said his relationship with News Corporation meant he should step aside from the process.

Mr Salmond pointed to Lord Justice Leveson's finding that the first minister "cannot be criticised", over his involvement surrounding the controversial proposed takeover of BSkyB by News Corporation.

During first minister's questions at Holyrood, Mr Salmond suggested the post-Leveson group should be non-political and chaired by a current or recent Court of Session judge.

The first minister appeared as a witness at the nine month-long Leveson Inquiry, which was prompted by the phone-hacking scandal at the former News of the World newspaper, owned by News Corporation.

Mr Salmond, who said he was "positive" about the findings of the inquiry, invited all the Scottish Parliament's political parties to meet him and give their views, adding: "I believe it's important to achieve cross-party agreement in Scotland on the best way forward."

The first minister, speaking in the context of Holyrood being responsible for the regulation of the printed media in Scotland, added: "I propose the establishment of an independent implementation group, chaired by a current or recent court of session judge, with five non-politician members.

"The purpose of this group would consider how best to implement the Leveson proposals in the context of Scots law and devolved responsibilities of this parliament."

During his evidence to the Leveson Inquiry, Mr Salmond was quizzed about his contact with media mogul Rupert Murdoch and his willingness to lobby the former culture minister Jeremy Hunt over the planned BSkyB takeover.

In his report, Lord Justice Leveson concluded Mr Salmond could not be criticised for his role in lobbying for the takeover of broadcaster BSkyB by Mr Murdoch's News Corporation.

What did Lord Justice Leveson say?

This cannot be characterised as statutory regulation

Some "troubling evidence" in relation to the actions of some police officers - but no proof of widespread corruption (Hear no …. See no …. Speak no …- Ed)

However, the judge's report said that, had Mr Salmond been successful in persuading UK ministers, his actions would have rendered any final deal "unlawful".

The inquiry also said there was no evidence of a specific deal between Mr Salmond and the Murdochs to trade newspaper support for help with the bid.

But Lord Justice Leveson said the first minister was seeking political support from The Sun in the same conversation as he was repeating an offer to assist with the bid.

The report added that there was clearly "mutual respect" and admiration between Mr Salmond and Mr Murdoch.

It said Mr Murdoch, the owner of The Sun and The Times, appreciated he was dealing with a politician of "considerable skill, resource and intelligence".

Scottish Liberal Democrat leader Willie Rennie insisted Mr Salmond was the most heavily criticised in the report and, therefore, his role in spearheading a cross-party group of leaders was in doubt.

He said the first minister had been accused by Lord Justice Leveson of "seeking to entice the UK government to act unlawfully over the BSkyB bid".

Mr Rennie added: "He should offer to stand aside from the cross-party work. It should be led by someone untainted by the report.

"Lord Leveson has seen right through Alex Salmond. He is justly concerned about the murky dealings between Alex Salmond and the Murdochs."

Labour Leader Johann Lamont added: "On the face of it, what Lord Leveson is recommending looks sensible.

And Ruth Davidson, the Scottish Conservative leader, added: "The Leveson Report contains some marked criticisms of the first minister and his conduct surrounding the BSkyB bid and his attempt to curry favour with The Sun newspaper.

"In light of these remarks, I think it would be wise for the first minister to take a step back from the process he announced today and allow another minister to represent the Scottish Government in the proposed cross-party talks."

While answering questions on the inquiry, Prime Minister David Cameron was asked by SNP MP Angus Robertson whether he endorsed Mr Salmond's proposals.

Reacting to Lord Justice Leveson's report, the first minister told BBC Scotland: "I think he's actually managed to make the distinction between state regulation, which I don't think would have been a good thing, on the one hand and the other hand self-regulation with an underpinning of the law, particularly if they give it incentives for people to take part and play the game, and that distinction's pretty successfully made in Leveson's conclusions."

On the attacks over his relationship with Rupert Murdoch, Mr Salmond added: "I think I'll accept the Leveson finding that I can't be criticised.

"He also says it's laudable for the first minister of Scotland to try and get jobs and investment for this country - that is the prime requirement."

Mr Salmond said it would be "totally irresponsible" not to have regular contact with News Corporation, which he said was Scotland's ninth biggest private sector employer, through News International and BSkyB, which supported 8,000 jobs.

MSPs will debate the Leveson Inquiry report next week.

Posted by Anonymous at 8:08 pm

Revenge of the magic circle? and I wouldn't trust Mr Salmond as far as I can throw him.

state of things to come under the fascists