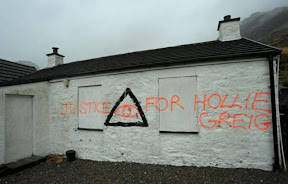 Justice for Hollie Greig slogans on Savile cottage have curiously not featured in national media coverage A cottage situated in Glencoe the Scottish Highlands which belonged to the deceased BBC celebrity Sir Jimmy Savile OBE KCSG who is now accused of hundreds of acts of child abuse, has been vandalised for a second time, with the words “Justice for Hollie Greig” painted in orange along its exterior walls.

However, while earlier graffiti painted on the cottage was pictured in the national media, consisting of masonic symbols and slogans of “Jimmy the Beast”, campaigners have today pointed out to Scottish Law Reporter that all further reports on vandalism at the cottage, where it is alleged abuse took place, have refrained from any mention of graffiti mentioning the Hollie Greig case, which saw a journalist & campaigner jailed for handing out leaflets calling for an inquiry into allegations of abuse against downs syndrome victim Hollie Greig, and the existence of a paedophile group in the Aberdeen area.

Posted by Anonymous at 3:35 pm