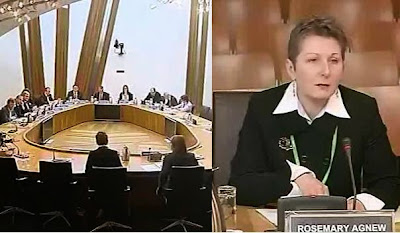 Scots FOI Chief rejects calls for honesty over lack of powers to deal with inaccurate data from public bodies. APPEARING to reject calls for new ‘honesty powers’ to deal with Scots public authorities who provide dishonest or inaccurate data in response to Freedom of Information requests, Scottish Information Commissioner Rosemary Agnew has claimed Scotland’s FOI system is "open, transparent and honest" – even though evidence & case examples suggest public authorities are releasing dodgy data in an attempt to avoid public scrutiny of their activities.

The Scottish Information Commissioner made the claims to MSPs during her appearance on 6 May at the Scottish Parliament’s Public Petitions Committee where msps considered proposals to give the Commissioner new powers to deal with dishonest public bodies, contained in Petition PE1512 Amendments to the Freedom of Information Scotland Act 2002 filed by retired Scotsman journalist Mr William Chisholm.

The petition calls on the Scottish Parliament to urge the Scottish Government to strengthen the Freedom of Information (Scotland) Act 202 by requiring public bodies to provide full and accurate information in all responses to FOI requesters, and to extend the powers of the Scottish Information Commissioner (SIC) to enable the Commissioner to investigate complaints alleging erroneous responses. The petition also seeks powers to impose monetary penalties on any public body which breaches the amended FOISA regulations on accuracy.

Throughout the debate Ms Agnew appeared unable to justify her opposition to the petition’s proposals to bring requirements of honesty into the FOI framework, giving at times rambling answers to questions put by msps. The full meeting minutes are available here: Official Report of meeting 6 May 2014 (434KB pdf)

The Commissioner went on to tell the Committee tthe most effective way to deal with FOIs was "getting it right first time"  - although many FOI requesters including some msps who use Freedom of Information to find out what Scottish public authorities are really up to, may find Ms Agnew’s claim on this point hard to swallow.

Commenting on Ms Agnew’s appearance before MSPs, the Petitioner, Mr Chisholm said: “In her evidence to the Committee on May 6th, the Scottish Information Commissioner (SIC) said she saw no need to amend the current legislation. This, despite the fact that 12,000 responders to FOI requests may be breaking the law in any given year, and even though there has not been a single prosecution or conviction under Section 65 of FOISA.”

Mr Chisholm continued: “The SIC also explained that an individual with a complaint about the accuracy of a FOI response had recourse under other Acts as well as FOISA. But it would seem much more logical for all issues relating to Freedom of Information to be monitored and governed by FOISA. How is that individual supposed to negotiate the labyrinth of legislation which seems to have been concocted to protect local authorities, Government agencies, and other organisations covered by FOISA?”

Concerns have also been raised over the Information Commissioner’s policy towards public authorities who provide dodgy information in response to FOI requests after it emerged in responses to the petition that not one single prosecution of a public body breaching FOI laws has taken place – even though the Information  Commissioner and Police Scotland identified 10 cases where there was evidence that suggested a section 65 offence may have been committed.

Concluding the debate. the  Committee agreed to defer consideration of the petition to a future meeting to allow time for the  Scottish  Government  to  respond  and  to  enable  the  petitioner  to comment on evidence received. 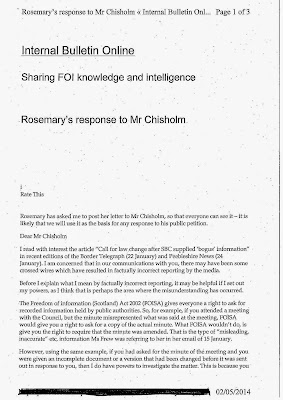 Disclosures obtained under Freedom of Information legislation and forwarded to Scottish Law Reporter have revealed how the Scottish Information Commissioner held discussions on how to respond to queries from the Scottish Parliament’s Petitions Committee on calls to integrate honesty clauses into the FOI Act.

In documents published today, the SIC is seen to discuss with staff as to how to reply to MSPs questions on the petition, and

Apparently concerned of queries over the lack of prosecutions of FOI violations, the SIC staff express concerns as noted : “Rosemary is to give evidence to the committee on Tuesday 6 May. One of the issues we expect will come up is about the number of s65 cases we've had. IT s a bit of a side issue (Mr Chisholm's concern appears to be about whether he was provided all information in scope of his request, though we never did have an application to investigate), but it was raised during Tuesday's committee meeting as one of the tests of whether FOISA is working.”

Commenting on the documents earlier today, transparency campaigners described the SIC’s efforts to wind up Mr Chisholm’s petition as “outrageous”.

A legal insider added “Considering the Information Commissioner has already admitted she does not have powers to investigate cases of dishonest FOI responses, perhaps the SIC may better focus its obvious influence in ensuring an honesty clause is attached to the Freedom of Information Scotland Act rather than expending so much effort to kill off the idea that anyone making an FOI request should expect honesty in responses from public bodies funded by taxpayers.”

Posted by Anonymous at 6:56 pm

How can a wolf in sheeps clothing be trusted to guard the chicken coup from the foxes?