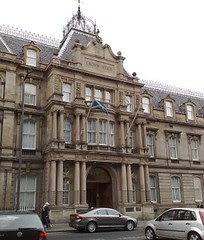 Stuart MacFarlane (45) from Glasgow was caught with at least 15,000 images of child pornography on computer equipment at his home after Police succeeded in gaining a search warrant to raid his premises and seize computer equipment.

Images seized by Police showed acts of a sexual nature against minors, and also pictures of sexual acts with animals. However, despite the severity of evidence seized, and the ex Procurator Fiscal’s admitting to downloading the material, sentence on MacFarlane was deferred at Paisley Sheriff Court although his name was placed on the sex offenders register.

A legal insider at COPFS has come forward this afternoon and told Scottish Law Reporter there have been other cases swept under the carpet of prosecutors, staff and former members of COPFS staff who were also found to be in possession of inappropriate images of children.

It is thought current & former COPFS staff thought to be involved in activities similar to MacFarlane have accessed such images through contact with online paedophile rings and in one worrying case, it has been revealed that evidence seized by Police in one case, was found on personal computer equipment of another prosecutor who has since stood down from his position yet has not faced criminal charges.

The now shamed ex Procurator Fiscal Stuart MacFarlane escaped prosecution for earlier charges of indecency with a prostitute while serving under Lord Advocate Elish Angiolini, the Crown Office claiming at the time “it was not in the public interest” to prosecute the former prosecutor who has now admitted to being a paedophile.

A FORMER depute fiscal whose career was overshad­owed by reports he had sex with a prostitute is facing jail after admitting downloading indecent images of children.

Father-of-two Stuart Macfar­lane, 45, spent hours hidden away from his family in a garden hut kept for his exclusive use.

When detectives raided the property in Eaglesham, Renfrew­shire, last December, they went to the shed on which there was a plaque saying 'Dad's Den'.

They seized two laptops, one of which had an external storage device, and took them away for forensic examination.

Paisley Sheriff Court was told Macfarlane was detained and questioned after being medically examined, as it was known he had previously claimed to be suffering from post traumatic stress disor­der after Iraq War service as a Territorial Army captain.

Deferring sentence for reports, Sheriff James Spy warned him: 'The court must be considering the question of custody.'

The heard that Macfarlane, whose address was given as Mount Florida, Glasgow, is cur­rently employed as a contractor in Afghanistan.

A former prosecutor is facing a prison term after he admitted downloading indecent images of children. Stuart MacFarlane, 45, from Glasgow, was caught with almost 15,000 images at his former family home in Eaglesham, East Renfrewshire, on 28 December 2012. Sentence on MacFarlane was deferred at Paisley Sheriff Court and his name was placed on the sex offenders' register.

A case against the ex-depute procurator fiscal, after he was allegedly caught with a prostitute, was dropped in 2006.

The court heard how police, acting under a search warrant, searched MacFarlane's then family home at the end of last year. They seized two laptops and an external hard drive from an outside shed, which had a plaque outside stating "Dad's Den".

After the computer equipment had been fully analysed, it was discovered that there were almost 15,000 still images. Some showed children posing alone, others showed sexual activity between children and adults, while others featured an animal. The girls involved in the images are thought to have ranged from three to 14 years of age.

The case against a prosecutor allegedly caught with a prostitute has been dropped because "it was not in the public interest" to proceed to trial.

Stuart MacFarlane, 37, a principal procurator fiscal depute in Glasgow, was arrested after a police function. He faced indecency and resisting arrest charges and resigned from the Crown Office earlier this month. Glasgow Sheriff Court heard the case would not proceed after "changes to his situation and medical reports".

It was alleged that Mr MacFarlane and Joanna Crane, 27, had been caught by police while she was performing a sex act on him. The offences were alleged to have taken place in Bothwell Street on 29 October.

David Spiers, procurator fiscal at Hamilton, told Glasgow Sheriff Court: "Mr MacFarlane's lawyer has advised of changes in his situation. "Considering this and specialist medical reports it would not be in the public interest to proceed further with this case."

The charge against Ms Crane was also dropped. She had pleaded not guilty to committing an offence of public indecency by engaging in a sexual act in a public place.

Mr McFarlane, who lives near Eaglesham, had not tendered a plea.

Posted by Anonymous at 1:20 pm

disgusting bunch,will the Police Scotland be allowed to arrest any more of these Crown Office perverts?over to you Mr House..

sentenced deferred?
What will the excuses be that caused a lawyer to be a pedo this time???

This is just the latest of the scores of cases where we can see that Scottish Legal Apartheid is alive and kicking in Scotland - where crooked Scottish lawyers are routinely allowed to be 'above-the-law'?

Proof folks, that Scotland is NOT a democracy after all and that our country has been hijacked by a criminal gang who have no compunction about perverting the course of justice in order to protect their colleagues?

This is overt criminality and whoever is responsible for this at the Crown Office should have no protection from the law because they are nothing other than common criminals and if a member of the public sees them they should make a citizens arrest and the Public would back them up for doing so?

In fact, maybe a wanted poster should be posted onto every lamp post in the land?


That IS in the PUBLIC INTEREST !

The problem is that The Lord Advocate & the Crown Office do not even understand the concept of SHAME because they arrogantly and overtly break the law to protect their own, at the expense of the Scottish public whom they clearly treat with contempt?

How can the laws of the land be applied to everyone in Scotland apart from Scottish lawyers?

What does this revelation say about Dame Elish Angiolini, as all of this was going on under her watch?

No surprise I wonder what the link is to the Hollie Greg cover up?

Why is it that Scottish pervert lawyers never seem to get prosecuted?

Is this because the Crown Office is chock full of them?

If House is worth his salt he will take Police Scotland out of Crown Office control and stop them interfering in investigations relating to members of the legal profession.

This appears to be a watershed moment for Scotland's new Police Service.

Will they go head to head with the Crown Office and make sure that these fiends are prosecuted and if the Crown Office try to make excuses and try to wriggle out of facing up to their responsibilities then arrest them too, as one thing is for sure the Scottish Public will back you 100% for doing so, especially in these times where the perverts are being hunted down?

It is high time these criminals in our midst are prosecuted?

One down another to go. Justice for victims of scottish law officials. Justice still to come for hollie greig. Justice for robert green.

I would reckon a shed will be erected for him in the prison garden from the tax payers purse but a job in the prison cinema house will definitely be out.

Could Angiolini be questioned?

These criminals are eating Scotland from the inside out. They won't stop until they are physically restrained from carrying out their evil agenda?

What possible excuse could be dreamed up for this criminal operating freely within the Crown Office for many years?

Was it accepted that as a Crown Office employee you expect to be 'above-the-law' and therefore were free to break the law with impunity?

How many more immoral crooks are there at the Crown Office whose judgements affect the Scottish Public, who are known perverts but have been allowed to use their twisted minds to 'bin' bona fide prosecutions or to sabotage a prosecution to snuff it out?

Anonymous said...
sentenced deferred?
What will the excuses be that caused a lawyer to be a pedo this time???

If you are a Solicitor, Advocate, Procurator Fiscal or work in any of Scotland's Procurator Fiscals Offices, a Solicitor or Lord Advocate in the Crown Office, a Police Officer or Chief Constable, a Government Employee, MSP, Senior Council Employee, Sheriff or Judge, a Senior Scottish legal Aid Employee, it is always not in the Public Interest to prosecute any of them for Paedophilia, sex with children, fraud, criminality, proceeds of Crime and Money Laundering, drug dealing, Legal Aid Fraud etc, as they are all in it together, and all protect each other, this crook will not go to jail, the Sheriff or Judge will say he has suffered enough from his alleged Post Traumatic Stress Disorder and his services in Afghanistan in severe conditions has led this otherwise decent and professional man to stray from the path of decency and respectability, he will be admonished and told to seek Psychiatric help for this minor discretion.
Does this site use the same moderator that the Government, Police, Newspapers, Television, Legal Profession, Crown Office, MSPs and Scottish Parliament use.

What influence and damage to potential prosecutions has this dirty rotten scoundrel done?

There needs to be an Independent Inquiry into the Crown Office staffing procedures and personnel?

The very heart of Scotland as a fit and proper country is being damaged by criminals throughout the Justice System?

Anonymous said...
This comment has been removed by a blog administrator.
December 19, 2014

Anonymous said...
This comment has been removed by a blog administrator.
July 02, 2016