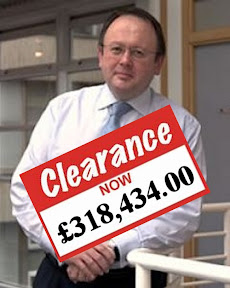 Is this man’s exit worth two Prime Minister’s salaries ? Scottish Borders Council accounts reveal huge exit payoff for Chief Executive David Hume who took voluntary redundancy. EXACTLY one year after Scottish Borders Council announced it’s then Chief Executive David Hume had left his post due to a “change in his personal circumstances” which came about after questions were raised over his spending on taxpayer bankrolled credit cards, financial accounts now published by the heavily-in-debt south of Scotland local authority reveal Mr Hume, who left his post in July last year after an extended period of sick leave received a staggering THREE HUNDRED & EIGHTEEN THOUSAND POUNDS in a pay-off linked to his application for voluntary redundancy.

However, questions are now being raised why SBC Council Chiefs, Councillors & legal officers fought for over a year to cover up the details of the pay-off to Mr Hume, a deal negotiated by lawyers acting for the former Chief Executive and Scottish Borders Council, who themselves contracted a private law firm, Glasgow based MacRoberts to "provide external employment law advice" on the bitter negotiations with Mr Hume's legal team. MacRoberts part in the exit negotiations of Mr Hume has only this week been made public by Ian Wilkie, the head of SBC’s legal team in response to Freedom of Information requests by members of the public who are campaigning for an inquiry into the murky circumstances surrounding Mr Hume’s departure from Scottish Borders Council. 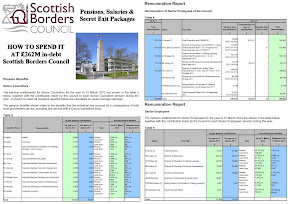 Rolling in it while Council debt burden increases – Salaries, Pensions & Secret Exit Packages of Council Chiefs finally revealed in secrecy battle. The annual accounts of Scottish Borders Council for 2011-2012 reveal Mr David Hume, who left his post as chief executive on 15th August 2011 received the sum of £103,174 as “compensation for loss of employment”, an explanation which local campaigners have pointed out is at odds with claims by SBC’s leader David Parker that Mr Hume retired. Council insiders have let it be known the “compensation for loss of employment” figure was the result of “tough negotiations between the legal teams.”

Revelations of Mr Hume’s spending spree on Council funded credit cards, reported in more detail by Scottish Law Reporter HERE, was taken up by the SNP’s Christine Grahame, MSP for the area and Chair of the Scottish Parliament’s Justice Committee who questioned why Mr Hume was able to use a corporate credit card while many constituents in the Scottish Borders are facing financial oblivion.

Ms Grahame said : “While many of my constituents are struggling to make ends meet Mr Hume was using a corporate credit card to enjoy luxuries and pay for expensive goods. It also beggars belief that in his time as Chief Executive of the council he backed numerous campaigns to shop local but decided to buy a brooch from Orkney as a gift for a visiting dignitary.?”

She added : “I would like to know if Mr Hume had carte blanche when using his credit card or was this expenditure monitored. I also feel that taxpayers need to know whether this extravagance was sanctioned by senior councillors who were, at the same time, grappling with the need to cut spending and ensure value for money.?” 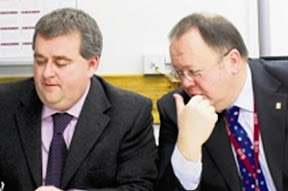 Council Leader David Parker & Chief Executive David Hume before murky exit While behind the scenes bitter legal negotiations were going on between lawyers acting for Mr Hume & the Council over a “voluntary redundancy” which Council Chiefs had spun into a “retirement, Council Leader David Parker said in a press release announcing Hume’s exit : “The Council is most grateful to David for his loyal and dedicated service over the last nine years. He has been instrumental in the Council’s success, and has demonstrated enormous commitment to the Council and the Scottish Borders. He departs with the best wishes of all elected Members and staff. He leaves a Council that is in strong heart, and which has been transformed under his leadership.”

However, during Mr Hume’s term at the Council, the south of Scotland local authority has found itself at the heart of persistent financial failures with the loss of millions of pounds in bankrupt Icelandic banks, and recent revelations by Scotland’s Finance Secretary John Swinney that Scottish Borders Council has a staggering debt mountain of TWO HUNRED & SIXTY TWO MILLION POUNDS.

Scottish Law Reporter has previously covered a long battle between local campaigners and Scottish Borders Council who were refusing to publish details of Mr Hume’s huge publicly funded pay off in articles HERE, where it was reported Mr Hume was effectively “pushed out” of his Council post, and HERE, where it had become clear senior figures at the Council had used the scandal & cover up to maintain their grip on power.

FORMER Scottish Borders Council chief executive David Hume walked away with more than £318,000 from his final year in his post.

The financial package for the 59-year-old, who stood down in August 2011, has been shrouded in secrecy, despite Freedom of Information requests.

But council accounts for 2011-12 finally reveal the extent of payments to Mr Hume, who left his £119,000-a-year job after being on long-term sick leave and is now employed by Children's Hearing Scotland.

and the story also appeared in the Scottish Daily Mail, with the following editorial :

THE scandal of local authority fat cats enjoying massive salaries, severance payments and pensions at a time of public sector retrenchment has been aggravated by the revelation that David Hume, former chief executive of Scottish Borders Council has left his post with a total package worth £318,000 – more than double the Prime Minister’s salary.

Although it was claimed he left his job as a result of being on extended sick leave, the accounts show his pay-off included £103,174 as “compensation for loss of employment”. He is now working for Children’s Hearings Scotland.

The amount of secrecy and contradiction surrounding this massive pay off will provoke considerable public concern.

Other SBC employees are in the second year of a pay freeze, while 107 highly-paid senior officials received salary increases. The unfairness of this situation is blatant. It seems that a culture of greed and unfair remuneration is not confined to the private sector. Is this what public service is about?

Posted by Anonymous at 2:26 pm

No wonder they wanted to cover it up.. 318,000 is a loony payout for someone running SBC considering the state the Borders is in.

Question: Why must taxpayers give huge bonuses to people doing public jobs????

Not much of a bargain is he

How do these people get away with it and what is this Scottish Borders mob up to trying a cover up to keep it all secret?

Damn it we have a right to know how public money is being spent!

What an utter disgrace and the Herald story says he's working at a Childrens hearings job so that'll be paid for by taxpayers again!

So where are the enraged SNP condemning this waste of taxpayers money which could be better spent on public services and the NHS ??

Oh now I get it - Scottish Borders Council (Must be getting a reputation for being BENT) is now under the influence of the SNP so a few million paid out by an SNP run Cooncil to execs who go on to join the quango club of Salmond's Scottish Government is ok.

Certainly proves there are NO advantages to going independent.

Very good.The one constant we can be assured of is public servants awarding their colleagues buckets of OUR money.

I say make him pay it back or surcharge all the councillors to recoup the payoff.

I live in Galashiels in the Scottish Borders and saw some of this in the Southern Reporter.His payout is an absolute disgrace considering how rubbish SBC is at managing the region.No one from that council is worth more than 50p I can assure you all.

It is good to see the Herald and the Scottish Daily Mail picking up the leads laid down by Scottish Law Reporter team - what a pity the SNP are content to do nothing.

God help us if this lot ever get a vote for independence.

So Mr Hume wont ever need to claim benefits because he'll always be in a plum job billing the taxpayer for millions like all the other useless hangers on at councils.

How many people on benefots,nearly homeless or on low incomes in the Borders could have had their lives changed with the £5 million wasted on all these useless tosspots

The key to Hume's exit is the chap sitting next to him in the second picture who remarkably is still leader of the council.

How much will Logan be negotiating when she eventually goes?lol

Interesting the part about MacRoberts brought in to help out SBC.This must have been as a result of a threat of legal action on Hume's behalf otherwise why bring in external legal when SBC's own Ian Wilkie is supposedly so hot at his job (of covering things up).

Anyone know how much SBC blew on MacRoberts fine legal advice which seems to have netted Hume another Hundred Grand for his exit package?

SBC's legal lot are not much good at anything other than perhaps talking to children inappropriately..

and the ratepayers in the Borders are going to let the council get away with all this?

How anyone can walk away with £318,000 for running what must be the most shambolic council in Scotland has to be a scandal and by the way where is loudmouth Graham to attack all this information?

Usually she's up with the cats at night screaming her head off about it but nowt in the papers.Is it by chance because the SNP are now in SBC with all their members in top positions & expenses sheets?

We'll be no better off under the SNP mark my words.

The Scottish Nazi Party will strengthen MacAskill's Law Society and sell the ordinary people of Scotland down the highway of legal hell. Christ they are doing it now. Independence will mean they will really show their true colours.

Access to Justice in Scotland is not universal. It is conditional so the country is not a democracy.

Put simply pals are looking after each other in Scottish politics. Whether it be the centre in Edinburgh or the periphery it is not about ability, only favouritism. Just like MacTrashkill with his Law Society.