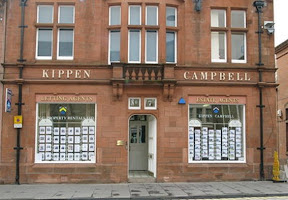 Perth lawyers bankrupted ill client on benefits for disputed fees. A BANKRUPTCY ordered by Perth law firm Kippen Campbell against a severely ill client in receipt of disability benefits, over disputed legal fees of around £2,700 in connection with a damages claim in Scotland’s Court of Session which curiously collapsed under the law firm’s representation has today been highlighted as an example of harassment by Scots law firms for questionable fees after revelations in the media that agents acting for Scotland’s Accountant in Bankruptcy threatened to seize property belonging to a family completely unconnected to debts which Kippen Campbell claim are owed to them.

Documents passed to Scottish Law Reporter this afternoon appear to show moves made to recover the demanded legal fees became so desperate, Glasgow based accountants Wylie & Bisset who are acting on behalf of the Accountant in Bankruptcy, sent demands to Kippen Campbell’s former client Mr Gordon who lives in Perth, threatening seizure & sale of his property, which he does not own, and the seizure & sale of another property owned by an unconnected family who live in Rattray, Blairgowrie, whose surname is also Gordon. 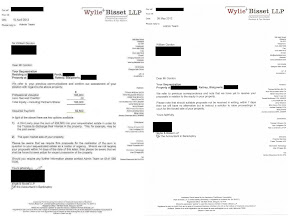 Another demand sent to Mr Gordon from Wylie & Bisset, just a few days after the earlier threat, stated : “Please note that should suitable proposals not be received in writing, within 7 days, then we will have no alternative but to instruct a solicitor to raise proceedings in court for the forced sale of your property.”

The bankruptcy case affecting Mr Gordon appears to have been a complex one, to say the least, with a further series of documents handed to journalists which appear to contain the names & apparently photocopied signatures of various Sheriffs, including Sheriff Lindsay Foulis and Sheriff Principal Alistair Dunlop on badly copied documents purporting to be court interlocutors.

The documents reveal a lengthy, bitter series of hearings raised by local solicitors Kippen Campbell in Perth Sheriff Court against their former client Mr Gordon, which appears to have culminated in an order to bankrupt Mr Gordon and the attempt to make him homeless over the disputed fees. However Mr Gordon was unable to attend any of the court hearings as his doctors had certified him too ill to attend court on no less than seven occasions and had informed the court of this in writing.

A legal insider studying some of the documents sent to Mr Gordon by a collection of Sheriff Officers, debt collectors & the Scottish Court Service said : “It is difficult to tell if Mr Gordon has actually been made bankrupt from the confused mess of paperwork & photocopied documents sent to him”

Further material passed to Scottish Law Reporter this afternoon, reveals a worrying series of recorded audio conversations involving Court staff based at Perth Sheriff Court, who appear to give conflicting instructions to Mr Gordon, who was at one stage told by key staff at Perth Sheriff Court not to attend the hearings.

No one from the Accountant in Bankruptcy has issued any statement on the case, or explained why agents Wylie & Bisset acting on the authority of the AIB decided to attempt to seize the properties of families unconnected to debts claimed to be owed to lawyers Kippen Campbell. Similarly, no one from Perth based Kippen Campbell has issued any comment.

One legal expert speaking to Scottish Law Reporter earlier today claimed law firms are increasingly using the AIB to go after clients for disputed legal fees connected to cases which have invariably collapsed in similar circumstances to that of Mr Gordon. Scottish Law Reporter will be investigating these claims for further reports.

Today’s Herald newspaper has featured a report on the bankruptcy case against Mr Gordon, here :

AN accountancy firm handling the sequestration of a man was preparing to seize the home of someone with the same name.

William Gordon, who lives in a rented house in Perth, was stunned to receive letters from Glasgow-based Wylie & Bisset demanding to know how much equity he had in a detached home in Rattray, Perthshire. When he ignored the letter, another arrived telling him a professional valuation had been conducted and the firm would target his share in the equity to cover a debt of £5200 to Perth law firm Kippen Campbell.

In fact, the William Gordon who owns the home in Rattray confirmed he had no connection with his namesake.

He said: "You'd think professionals involved in such a serious business would carry out their job a bit more thoroughly."

The target of the sequestration added: "I pay rent on a modest home in Perth. Why would I be doing that if I owned a lovely detached house 15 miles away in one of the most desirable parts of Perthshire?"

Wylie & Bisset was appointed by the Accountant in Bankruptcy (AIB) to pursue the legal firm's debt. Gordon Chalmers, a partner in Wylie & Bisset, said: "It would be inappropriate for me to add anything further to what you have from the AIB on the matter."

Posted by Anonymous at 3:50 pm

How much are Wylie & Bisset milking the taxpayer funded AIB for this intimidation on behalf of crap lawyers?

Interesting.What this seems to boil down to is a local law firm in Perth using its muscle in Perth Sheriff Court to go after someone too ill to respond.

Hope they lose lots of business because of the publicity and three cheers for Mr Gordon!

The legal mafia at work again.

What would have happened if they went ahead with the court order to seize the other Gordon's home and toss them out onto the street?

I suspect others have been dealt with in a similar way and we are only getting to find out about it now.

Oh and the AIB are thoroughly bent if you are wondering..

Give me your house or else - Wylie & Bisset

They will have covered up what happened to him and now they are going for the jugular. If he committed suicide the only thing that would bother them are their fees. Pure Law Society scum.

He said: "You'd think professionals involved in such a serious business would carry out their job a bit more thoroughly."
--------------------------------
They do not have to be careful Mr Gordon simply because their professional bodies protect them, but they cannot this time. Some world we live in. It is a constant battleground.

There is no limit to the butchery of the lawyers scalpel. Radical evil sums them up perfectly.

Kant wrote "evil was redical when someone could not fight back". And our MSP's condone this.