DO U TRUST LAW ? : Inheritance fight will go to UK Supreme Court after Scots judge rules against Party Litigant widow in 27 year battle over will

A LENGTHY LEGAL BATTLE over Scots farmer James Clark’s £2.2 million pound residual estate which has cost nearly one million pounds in legal fees for both sides in the long running case is now to be taken to the UK’s Supreme Court in London after the late farmer’s first wife Joan Pentland Clark, who has been forced to appear in court as a party litigant, suffered an unexpected setback after a ruling was issued by Scotland’s pro-establishment Court of Session, finding against claims there was a fraudulent breach of trust on the part of executors (one of whom was a solicitor) of the estate of the deceased Mr Clark, who died in 1985. The appeal will be keenly watched by legal observers after claims that important factors such as current protections for wills from corrupt Executors appear now to be in doubt after the ruling issued by Lord Carloway.

Media coverage of the case has revealed the dying farmer signed several now highly disputed documents on his deathbed heavily adjusting the terms of disposition and awarding leases which had not been agreed to with the bank who owned titles to the land for security of loans.

While Mrs Pentland Clark prepares her appeal to the UK’s Supreme Court, on which Human Rights grounds will play a major factor, it has today emerged through revelations of the content of email correspondence that Professor Allan Miller, chair of the Scottish Human Rights Commission has point blank refused via his staff to see Mrs Pentland Clark to discuss or offer any assistance on the case.

More about the case can be seen at Do U Trust Law, which provides the wider public with the details of the Clark family’s 26 years of litigation in their struggle for Justice and resolution.

This case is important from a public perspective because - inherent in the decision of the Inner House of the Court of Session dated 27 March 2012 - Scotland's highest Court has abandoned the fundamental safeguards prohibiting self-interested Executors acting in their own interest to the detriment of their trust duty.

That fundamental prohibition against self-dealing by fiduciaries is common to all civilised countries - and its abandonment by the Scottish Court begs the question:- what are the implications for Scotland's fund management industry, and can any Scottish testator trust the Court's to enforce his Will ?

Media coverage from The Mail on Sunday regarding the case follows : 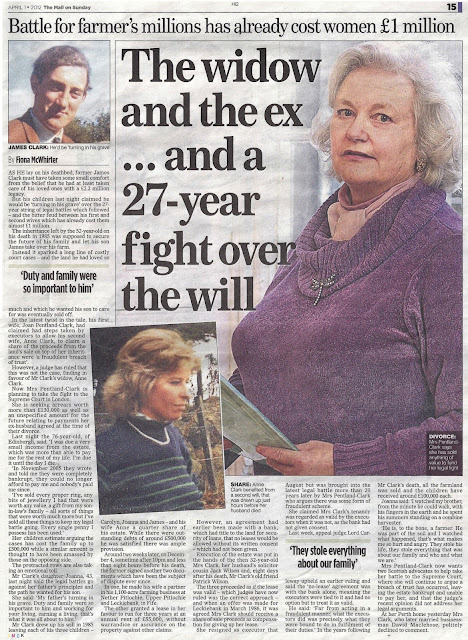 The widow and the ex … and a 27 year old fight over the will.

As he lay on his deathbed, farmer James Clark must have taken small comfort form the belief that he had at least taken care of his loved ones with a £2.2 million legacy.

But his children last night claimed he would be ‘turning in his grave’ over the 27-year string of legal battles which followed – and the bitter feud between his first and second wives which had already cost them almost £1 million.

The inheritance left by the 52-year-old on his death in 1985 was supposed to secure the future of his family and let his son James take over the farm.

Instead it sparked a long line of costly court cases – and the land he loved so much and which he wanted his son to care for was eventually sold off.

In the latest twist in the tale, his first wife, Joan Pentland-Clark, had claimed steps taken by executors to allow his second wife, Anne Clark, to claim a share of the proceeds from the land’s sale on top of her inheritance were ‘a fraudulent breach of trust’. However, a judge has ruled that this was not the case, finding in favour of Mr. Clark’s widow, Anne Clark.

Now Mrs Pentland-Clark is planning to take the fight to the Supreme Court in London. She is seeking arrears worth more than £130,000 as well as an unspecified amount for the future relating to payments her ex-husband agreed at the time of their divorce.

Last night the 76-year-old, of Edinburgh, said: “I was due a very small income from the estate, which was more than able to pay me for the rest of my life. I’m due it until the day I die. In November 2005 they wrote and told me they were completely bankrupt, they could no longer afford to pay me and nobody’s paid me since. I’ve sold every proper ring, any bits of jewellery I had that were worth any value, a gift from my son-in-law’s family – all sorts of things that were worth much more but I’ve sold all these things to keep my legal battle going. Every single penny I possess has been used.”

Her children estimate arguing the case has cost the family up to £500,000 while a similar amount is thought to have been amassed by the opposing side. The protracted rows are also taking an emotional toll.

Mr. Clark’s daughter Joanna, 43, last night said the legal battles go against her father’s principles and the path he wanted for his son. She said: “My father’s turning in his grave. Duty and family were so important to him and working for your living, earning a living, that what it was all about for him.”

Mr Clark drew up his will in 1985 leaving each of his three children, Carolyn, Joanna and James – and his wife Anne a quarter share of his estate. While there were outstanding debts of around £500,000 he was satisfied there was ample provision.

Around two weeks later, on December 4, sometime after 10pm and less than eight hours before his death, the farmer signed another two documents which have been the subject of dispute ever since. In one, he made his wife a partner in his 1,100-acre farming business at Nether Pitlochie, Upper Pitlochie and Leckiebank, in Fife. The other granted a lease in her favour to run for three years at an annual rent of £55,000, without warrandice or assurance on the property against other claims. However, an agreement had earlier been made with a bank, which had title to the land for security of loans, that no leases would be allowed without its written consent – which had not been obtained.

Execution of the estate was put in the hands of the then 32-year-old Mrs Clark, her husband’s solicitor cousin Jack Wilson and, eight days after his death, Mr Clark’s old friend Patrick Wilson. The three proceeded as if the lease was valid – which judges have now ruled was the correct approach – and when an offer was made for Leckiebank in March 1986, it was agreed Mrs Clark should receive a share of the proceeds as compensation for giving up her lease.

She resigned as executor that August but was brought into the latest legal battle more than 20 years later by Mrs. Pentland-Clark who argues that there was some form of fraudulent scheme. She claimed Mrs Clark’s tenancy was regarded as valid by the executors when it was not, as the bank had not given consent.

Last week, appeal judge Lord Carloway upheld an earlier ruling and said the ‘no-lease’ agreement was with the bank alone, meaning the executors were tied to it and had no option but to treat it as valid. He said: “Far from acting in a fraudulent manner, what the executors did was precisely what they were bound to do in fulfilment of their duties.” In the years following Mr Clark’s death, all the farmland was sold and the children have received around £100,000 each.

Joanna said: “I’ve watched my brother, from the minute he could walk, with his fingers in the earthand he spent his summers standing on a combine harvester. He is, to the bone, a farmer. He was part of the soil and I watched what happened, that’s what makes me so hurt and angry. They stole his life, they stole everything that was about our family and who and what we are.”

Mrs Pentland-Clark now wants two Scottish advocates to help take her battle to the supreme Court, where she will continue to argue a breach of trust has occurred, leaving the estate bankrupt and unable to pay her, and that the judge’s recent opinion did not address her legal arguments.At her Perth home yesterday Mrs Clark who later married businessman David Maclehose, politely declined to comment.

Posted by Anonymous at 3:39 pm

Party litigant widow v two of Edinburgh's 'finest' law firms and a court predisposed towards its friends in the legal profession.

No chance of justice for Mrs Clark.

If ever there was a case of a vindictive Court acting against an innocent lady, this must be it?

You must be joking, not in this "Master Policy" Jurisdiction you won't.

Anonymous - predisposed! you say.
I'd say - its partiality for the professional ones, with a prejudicial bias against the "other" (some sort of sub-human species, beneath the status even of a ..... ). How dare such like ever cross their threshold!