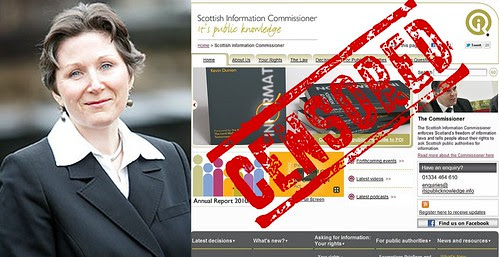 A whistle-blowing member of staff at the Scottish Parliament who has been involved in the secret discussions for the website redesign told Scottish Law Reporter this morning the secret plan to wipe all decisions was being discussed between only a few msps amid concerns of protests from the public & media over the content of Mr Dunion’s current website and all previous decisions being lost or being made deliberately difficult for members of the public to access in any replacement website.

The insider confirmed : “The plan being discussed is for the entire FOI website to be taken offline while officials & msps argue over the redesign which ‘may’ archive only short summaries of selected cases or more probably remove all content of Mr Dunion’s previous investigations & decisions to give the new Scottish Information Commissioner a fresh start.”

The source continued : “So you can expect to see decisions such as the one revealing the SPCB’s attempt to cover up MSP David McLetchie’s theft of expenses for taxi journeys to be deleted from public view. I’m sure he and the Scottish Conservatives will be very happy at this prospect, as will a few other msps caught out by Mr Dunion’s decisions on poorly handled foi requests.”

Before & After Dunion ? MSPs plan to delete all previous decisions on Info Commissioner’s website. Many of Mr Dunion’s decisions on cases brought to his attention during his two terms of office serving as Scotland’s Information Commissioner since 2002, have revealed scandals involving politicians expenses, hospital deaths, failings of Police Forces around the country, failures of the justice system including Scotland’s Prosecutors & justice bodies such as the Crown Office, and Rosemary Agnew’s current employment base, the Scottish Legal Complaints Commission which has been investigated on at least TWENTY OCCASIONS by the Scottish Information Commissioner and his team, with most decisions going against the SLCC during Agnew’s term as Head of Investigations and then its Chief Executive.

Further decisions of Mr Dunion and his investigations team have led to exposures of scandals involving local authorities & the Scottish Government, with some cases bitterly fought in the courts by lawyers acting for the Scottish Government in attempts to block publication of material sought by members of the public & media.

An insider said today “It will be a disaster for openness & transparency if msps went ahead and bulldozed Mr Dunion’s entire work over the past decade.”

A law reform campaigner speaking to Scottish Law Reporter earlier today said : “Msps and the Scottish Government must be preparing to hide something big to appoint someone with a record of being anti-foi. What are the big political issues around just now ? independence referendum and a crap justice system with more criminals in it than outside it .. couldn't be a coincidence of course.”

Internal notes on discussions on the planned changes to the Information Commissioner’s current website shown to a journalist staggeringly reveal one msp wants the new website to be handled by the same team who handled the ‘redesign’ of the Scottish Parliament’s E-Petitions website, which has been purposely kept offline for nearly a year out of fears football fans may use it to lodge e-petitions to challenge the Scottish Government’s controversial anti bigotry law, the Offensive Behaviour at Football and Threatening Communications (Scotland) Bill. Scottish Law Reporter covered the year long loss of the E-Petitions website due to sectarian fears, HERE

Meanwhile, msps were at pains to portray their choice of Information Commissioner, Ms Agnew as a step in the right direction.

Justice Committee Convener Christine Grahame Christine Grahame MSP who has been caught out before via foi requests and was recently accused by a former employee of allegedly making sectarian jibes against fellow msps and alleged expenses fiddling, released a statement on Agnew’s appointment claiming : "The commissioner's role is an important one. The commissioner is responsible for enforcing and promoting Scotland's freedom of information laws which give people anywhere in the world access to information held by more than 10,000 public authorities in Scotland."

She added: "Rosemary Agnew will bring to the post a range of skills and experience, including an understanding of the challenges freedom of information presents to those seeking and providing information. I believe Rosemary Agnew will prove to be an effective and fair commissioner who will bring to the post enthusiasm and a determination to continue to ensure that the freedom of information regime in Scotland remains highly regarded throughout the world."

Christine Grahame also sat on the secret closed-to-the-public all women msp only selection panel which gave Agnew the £78,000 a year plus expenses job for a SIX YEAR TERM. Grahame introduced the motion in the Parliament herself to require msps to vote for her choice. “S4M-01865 Christine Grahame on behalf of the Selection Panel: Appointment of the Scottish Information Commissioner—That the Parliament nominates Rosemary Agnew to Her Majesty The Queen, for appointment as the Scottish Information Commissioner.”

Carole Ewart, co-convener of the Campaign for Freedom of Information in Scotland said: "We congratulate Ms Agnew on her appointment, and look forward to continuing working with the Commissioner's office to develop and promote this important legislation. The Scottish Information Commissioner is a key figure in the success of FOI and, as FOI is at a pivotal stage in Scotland, we would like to see her continuing the positive developments her predecessor has established."

A journalist from a national newspaper branded the comments by msps & alleged FOI campaigners as “barmy” and pointed to the number of decisions taken by the Scottish Information Commissioner “to rebuke” Agnew’s handling of FOI requests as evidence the incumbent for Mr Dunion’s job appears to be anti-foi and against transparency & accountability.

Whether Ms Agnew chooses to promote Freedom of Information by continuing Mr Dunion’s demands for FOI to be safeguarded & expanded, or simply decides to allow public bodies, politicians and others to keep their secrets to themselves, remains to be seen.

Posted by Anonymous at 2:34 pm

'Taxi' McLetchie will be happy to hear this

NOT surprised one bit

Hope she remembers she's not serving lawyers now she's serving the rest of us.

Strikes me as difficult to accept she gets Dunions job after she/her brief was investigated by him 20 times.

Anyone else think this is stinks?

The mere mention of Christine Grahame in all this is reason enough to believe.Little wonder Mr Dunion did his utmost to promote FOI before he left on leave.

Grahame was rumoured to say "Oh I do like to be beside the seaside.. hic"

Clearly the scottish parliament want a tame FOI Commissioner to keep things under wraps - hardly surprising given its record for not complying with the Act - and they have certainly chosen the right candidate for that.

Nothing from Dunion about this?

If he's half the man he claims to be surely there will be some strong words against giving his job to someone he's investigated so many times?

Why no word about this in our 'free' press?

Mexican troops have made an historic seizure of 15 tons of pure methamphetamine in the western state of Jalisco, the Mexican army said in a statement released late Wednesday.

Soldiers discovered the huge cache in the town of Tlajomulco de Zuniga, a suburb of Mexico's second-largest city, Guadalajara.

Stick that up your foi Holyrood scags

There's a lot more than the addict msp stuffing crystal meth up their hooters but you should't worry too much because their health is crap.Not immortal thank goodness.God will surely prevail and save us all.

If you really want to get to this mob you should let the FBI know how many Scottish Gov & Scottish Parliament employees carry drugs and other illegal items when going into/coming back from the good ol' USofA.

I used to work for an msp who is a long time cocaine user.You should see her in the morning.A frightening sight yet they made her a head of a Scottish Parliament committee.They do see junkies flock together.If you look at her friends they are all in the closet on addictions.

I think the FBI & other countries Police will be very interested to know the names of msps their staff and ScotGov employees are taking/using drugs while abroad.

In fact I'm sure they have read these comments and are already looking through their files.Maybe someone should ask questions.