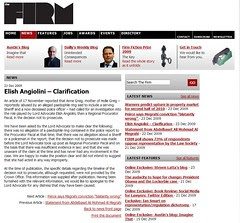 Second apology from “The Firm” after legal threats. New developments in a widely reported abuse case where downs syndrome victim, Hollie Greig and her mother Anne have made consistent claims of abuse at the hands of an alleged paedophile ring in the Aberdeen area, initially reported to Grampian Police over ten years ago, have resulted in Scots legal publication “The Firm” being forced into a second apology clarification to the Lord Advocate over their report of 17 November 2009, which related to the identification of key legal figures connected with the claims made by Ms Greig, and a ‘timeline regarding a decision not to prosecute in the abuse case’, the details of which cannot be reported due to legal threats from the Crown Office itself.

The Firm said : “An article of 17 November reported that Anne Greig, mother of Hollie Greig – reportedly abused by an alleged paedophile ring said to include a serving Sheriff and a now deceased police officer – had called for an investigation into the role played by Lord Advocate Elish Angiolini, then a Regional Procurator Fiscal, in the decision not to prosecute.”

“We have been asked by the Lord Advocate to make clear the following: there was no allegation of a paedophile ring contained in the police report to the Procurator Fiscal at that time; that there was no allegation about a Sheriff or a policeman in the report; that the decision not to prosecute was made before the Lord Advocate took up post as Regional Procurator Fiscal and on the basis that there was insufficient evidence in law; and that she was unaware of the claim at the time and has never had any involvement in the case. We are happy to make the position clear and did not intend to suggest that she had acted in any way improperly.”

“At the time of publication, the specific details regarding the timeline of the decision not to prosecute, although requested, were not provided by the Crown Office. This information was supplied after publication. Having been furnished with the relevant information, we would like to apologise to the Lord Advocate for any distress that may have been caused.”

In breaking news on the story today, legal insiders have now confirmed that private law firms, among them Levy & McRae solicitors, acting on behalf of Elish Angiolini, the Lord Advocate have contacted bloggers and journalists, threatening legal action for defamation if information originally reported by “The Firm” on 17 November 2009, and reprinted around the web on various blogs and internet publications, was not removed immediately. 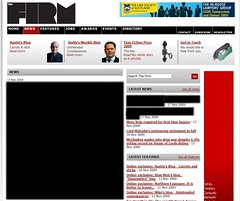 Scots Law online magazine “The Firm” censored abuse case report resulted in more legal threats to media. A legal insider speaking on the Hollie Greig case, who Levy & Mcrae allege had committed defamation by referring to the original article which “The Firm” published & later retracted over legal threats, said : “I received a very stern E-mail from Levy & McRae Solicitors and Notaries Public threatening legal action against me and the hosts of my blog unless I removed the content in question forthwith. At no time in my post did I suggest that the [censored] had been involved in the decision. I was relying on the information reported in The Firm (which has a relatively good reputation as far as I am aware).”

Another individual who claimed he had also received such a letter said he could not even discuss it as he had been officially gagged over the whole affair.

The Crown Office have so far refused to give any media statement, or even confirm that Levy & McRae were acting for the Lord Advocate, and Grampian Police have refused to reply to media enquiries on the case. Today however, it has been revealed by Aberdeen’s Press & Journal newspaper there is to be no prosecution over the abuse allegations by the local Procurator Fiscal.

While the decision not to prosecute will not surprise many, when it comes to claims involving members of Scotland's legal establishment, a less than clear picture is emerging of how the decision not to prosecute has been arrived at, with claims that key documents including initial reports made to Grampian Police in 2000 have now ‘vanished’ along with letters to & from local MSP Brian Adams to certain legal figures and even medical reports, now apparently missing despite Grampian Police’s recent re-investigation of the case.

Robert Green, the legal representative of the Greig family today said the Grampian Police investigation had been "far from thorough" and the campaign for a prosecution of identified individuals would go on.

It is widely believed there is much more to come on this case, noting while media outlets have been threatened with legal action, the victims have not. You can read our earlier reports on the case, HERE and HERE

A disabled woman who claims she was abused as a young child by an Aberdeen paedophile ring has been told there is not enough “credible” evidence to bring criminal proceedings against the people she accused.

Hollie Greig, who has Down’s Syndrome, claims she was abused for 14 years from the age of six, and has given police the names of some of the men she says assaulted her, including a senior police officer and a sheriff.

The 30-year-old and her mother, Anne, have been campaigning since 2000 – when police were first informed of the alleged abuse – for criminal proceedings to be taken against those she claims were involved.

The abuse is alleged to have taken place in Aberdeen, and Hollie and her mother claim to have made a statement at Bucksburn police station in July 2000 naming a senior police officer, who has since died, and a sheriff, who is still serving.

Hollie was re-interviewed by police last year, raising Mrs Greig’s hopes that charges would be brought against her daughter’s alleged attackers.

The Crown Office revealed last night that there was not enough reliable evidence to proceed with the case, however.

A spokesman said: “Historical allegations of sexual abuse made by a 30-year-old woman in Shropshire have been thoroughly investigated by Grampian Police.

“Crown Counsel have considered all the available information and decided that there is insufficient credible, reliable and admissible evidence to justify criminal proceedings in respect of these allegations.”

Despite no charges ever being brought, Hollie received £13,500 compensation from the Criminal Injuries Compensation Authority in April last year.

It is understood that followed evidence from a Grampian detective inspector, who described Hollie as “a truthful witness to the best of her ability and an entirely innocent victim”.

Mrs Greig, 58, said her daughter has experienced nightmares and panic attacks since she first told her mother about the alleged abuse.

Last night, her legal adviser, Robert Green, said Mrs Greig was “devastated” to hear no charges were being brought, but said her campaign for justice would continue.

Two officers from Grampian Police visited Hollie in September and spent three-and-a-half hours re-interviewing her at a special facility at Shrewsbury.

Hollie and her mother moved to Shropshire to escape the alleged abuse.

Mrs Greig claims two of the alleged abusers moved to Portugal a number of years ago and she went to her local police station at Shrewsbury to pass on that information when news broke of the kidnapping of Madeleine McCann.

Madeleine, who was three at the time, was kidnapped from her family’s holiday apartment at Praia da Luz in the Algarve in 2006. Police believe she was taken by a paedophile.

Posted by Anonymous at 5:25 pm