Victims of abuse : Hollie Greig and her mother, Anne. LEGAL THREATS against newspapers and online media over the reporting of allegations of serious & prolonged abuse dating back over a decade, made by former Aberdeen resident Hollie Greig against senior legal figures allegedly involved in a Paedophile ring based in Aberdeen, yesterday, resulted in online investigations & reports into the scandal being pulled after intervention from the most senior levels of Scotland's legal establishment. 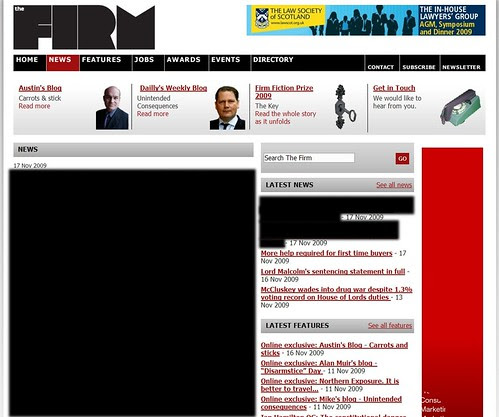 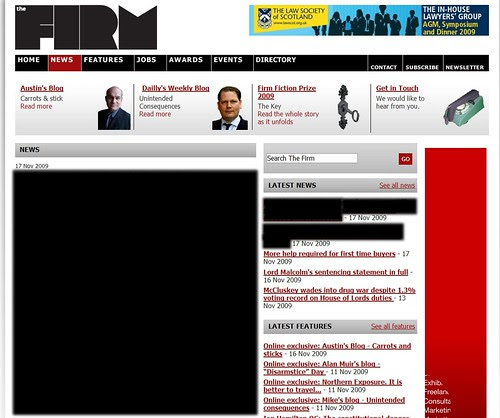 The allegations, made by Down's Syndrome sufferer Hollie Greig against several identified individuals, which, according to Aberdeen's Press & Journal newspaper include a Sheriff & senior Police Officer, also identified a big name in Scotland's legal establishment who is alleged to have been involved in the investigation, but who now cannot be identified for legal reasons due to a clamp placed on reporting the story by Scotland's Crown Office.

Grampian Police are said to have interviewed Hollie Greig during September of this year as they pursued their investigation, although it transpires from media reports still available that Hollie and her mother claim to have made a statement at Bucksburn police station in July 2000 naming a senior police officer, who has since died, and a Sheriff who is still serving on the bench.

Justice Secretary Kenny MacAskill refused to comment on Hollie Greig's case. While supporters & friends of Hollie's family have sent out pleas for help to many of Holyrood's MSPs, including Brian Adam who, documents now reveal was involved in assisting Hollie & her mother while they lived in Aberdeen, Justice Secretary Kenny MacAskill refused to make any comment on the case, instead referring media interest to Scotland's Crown Office. When enquiries were made of the Crown Office for their reaction to the abuse allegations and certain details, the Crown Office issued a release which contained a threat of defamation proceedings against anyone who quoted two reports published on 17 November in one of Scotland’s legal publications, “The Firm” magazine. 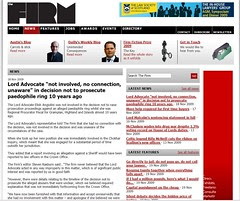 Today, “The Firm” retract their allegations against the Lord Advocate. In a breaking development today, “The Firm” have printed a full retraction of their claims, apologising to Scotland’s Lord Advocate, Elish Angiolini. The Firm’s editor Steven Raeburn said:. “The firm never believed that the Lord Advocate acted in any way improperly in this matter, which is of significant public interest and was reported by us in good faith “However, there were details relating to the timeline of the decision not to prosecute the alleged abusers that were unclear, which we believed required explanation that was not immediately forthcoming from the Crown Office. “We have now been furnished with that information and accept unreservedly that she had no involvement with this matter – and apologise if she believed we were suggesting otherwise.”

Now, one might think this sudden secrecy on alleged sex offenders and paedophiles in Scotland seems a bit out of place, considering over the past few days we have seen yesterday’s big announcement by Central Scotland Police they had collected up to 2000 email addresses in an investigation into online predators targeting children for abuse and a recent statement by Justice Secretary Kenny MacAskill in the Scottish Parliament on sex offenders

Kenny MacAskill’s statement on Sex Offenders to Parliament, so far nothing on Hollie Greig …

Posted by Anonymous at 1:31 pm

While Angiolini worries about her non involvement we are here in 2009 talking about criminal sexual abuse to a disabled girl that no one has been charged with.

"Lord Advocate “not involved, no connection, unaware” in decision not to prosecute paedophile ring 10 years ago"

LOL ! Who is their headline writer ? The Crown Office ??

So having silenced the Firm with the threat of a defamation action the Lord Advocate will now sue the alleged victim's mother for saying the same ?

So having silenced the Firm with the threat of a defamation action the Lord Advocate will now sue the alleged victim's mother for saying the same ?

I'd like to see Angiolini try that although she has to do it after what's gone on at the Firm.If not. Well draw your own conclusions everyone.

Oh, I doubt she will have the guts to sue Anne Greig or anyone else in this despicable and very murky affair.

We are still waiting for her to sue us for defamation, but she refuses to comment on our letters implicating her in the Hollie Greig abuse scandal.

If she tries to, we will let you and the world know of course!

Hollie tells police she was abused by sheriff ...

If you would like information on what you can do to help please join this facebook group:
http://www.facebook.com/home.php#!/group.php?gid=310572835068

We have links to emailing programs, videos on teh case and MP's addresses which will allow you to enquire about what is being done.
We need your support!
Thankyou